By Nam Hyun-woo3M has built an international reputation for its adhesive products including Scotch Tape, Post-it and a slew of other sticky products that led the Minnesota-based mining firm to stand out as a multinational conglomerate making various industrial materials and consumer goods.

This is a dream that Cho Hong-ro has on his company, SR Technopack, a mid-size enterprise specializing in food packaging products and materials, especially films with oxygen barrier properties. Like 3M has established its prowess through "sticking" to adhesives, Cho said his company wants to emulate 3M's success story by expanding the scalability of its oxygen barrier technology.

"We believe the scalability of oxygen barrier film is indefinite depending on its application," Cho said during an interview with The Korea Times. "Our priority is packaging food, currently, but we don't want to limit our technology to it. Our goal is more close to preserving the chemical properties of the content, and this can be the case for OLED displays and other advanced electronic technologies which need to be airtight."

SR Technopack is a wholly-owned subsidiary of Samryoong, a company which has been making carton packs for milk, juice and other beverages since Cho's father and former Haitai Diaries CEO Cho Rak-kyo founded the company in 1980.

After its establishment, Samryoong quickly garnered its shares in the market thanks to its own technology of coating and making carton packs. Before Samryoong to produce carton packs, Korea had been fully relying on imported carton packs due to limits in barrier technologies.

Following the development, Samryoong rose to be No. 1 carton pack maker in Korea, with its market share accounting for 30 percent, currently.

After running stably for years, the company also saw its inflection point, as the country's milk consumption declines amid the low birthrate. After succeeding his father to become the company's CEO in 2010, Cho decided to find a new business tack for the company's survival, acquiring a food packaging unit of E.SAENG Group in 2012, and renamed it as SR Technopack.

After its acquisition, SR Technopack has been producing plastic containers, such as those for precooked rice products, but found the lid of those containers _ not only SR Technopack's but also its rivals' _ were using ethylene vinyl alcohol (EVOH) films which were imported from Japanese firms.

"The future of packaging lies in the material," Cho said. "The market is filled with players who can process materials. A fundamental competitiveness for a company is how it can come up with different materials, which have advantages in protection, preservation and eco-friendliness."

With his belief, SR Technopack and Samryoong's other subsidiary, SR Chemical, began developing films which can replace EVOH in terms of price, oxygen barrier and eco-friendliness in 2015, and rolled out a liquid compound for coating films, dubbed GB-8, last year.

Unlike other films based on EVOH, SR Technopack's GB-8 is based on polyvinyl alcohol (PVA). PVA exceeds other materials in its ability to prevent oxidation, but is soluble in water, thus has been garnering not much attention in food packaging.

To overcome this, GB-8 used its patented recipe for resistance to water, according to Cho. Since it is applicable to materials which are generally used for food packaging, it has advantages in commercialization and cost effectiveness compared to existing oxygen barrier films, which need to glue multiple layers having different properties.

According to SR Technopack, its GB-8 coated film permeates 0.123 cubic centimeters of oxygen per square meter per day, which is far lower than 0.565 cubic centimeters by existing EVOH films. GB-8 won its Korean patent in 2018 and is currently under review in the U.S., Japan, China and Europe.

Another advantage of GB-8 is its environmental friendliness. Cho cited an example of ready-to-drink coffee products, which are usually packed in plastic cups in Korea and a number of other markets.

"Though many consider those cups as recyclable plastic, in most cases they are categorized as 'Other,' which refers to a mixture of plastics and other materials thus not readily recyclable, thus being destined to become landfill," Cho said. "Not only these cups, but also many beverage carton packs are categorized as non-recyclable, because they use aluminum materials inside the materials to block oxygen."

When GB-8 is applied to the cups' label, however, they are categorized as "PP," which refers to the cups' main material of polypropylene, and can be recycled into fibers. This is because the amount of PVA used for coating the label is small and GB-8 ingredients are biodegradable.

Currently, cup coffee products by Nestle Malaysia and Purmil are using SR Technopack's GB-8 coated label and being categorized as PP. Cho said a number of big name dairy and beverage firms will join them in the near future.

"The climate of Malaysia is one of the most difficult condition for food logistics and packaging," Cho said. "After through testing, Nestle showed its trust in our packaging technology and considers applying GB-8 on more of its products." He added that a number of leading food packaging firms in Europe have been testing GB-8 to apply to their packaging products currently.

Such a move is in line with the strengthened environmental regulations on food packaging across the world. Tetra Pak, one of the world's largest food packaging firms, is currently under growing calls from global regulators on its use of aluminum in carton packs, and is making various efforts to reduce aluminum use or funding recycling firms to help them better separate aluminum from recyclable materials.

"Food packaging is bound to be disposable; a growing number of countries are coming up with regulations on food packaging," Cho said. "With the industry now paying more attention to their environmental footprint, we believe our material has a competitive edge and strives to achieve a 10 percent global market share in food packaging film."

Cho expects that more than 50 billion won of revenue will be generated from GB-8, based on an anticipation that the material will take a significant portion of the $3 billion global market for food packaging aluminum and be the new paradigm of food packaging materials.

The food packaging market is projected to show a sharp growth in the future based on the rising demand for home meal replacements.

As for packaging materials, the market for transparent food packaging barrier film will see demand of around 1.9 million tons next year.

"Though we developed GB-8, its value depends on the people who will use this material for their products," Cho said "GB-8 is currently focused on food packaging, but our next generation materials such as GB-9 or GB-10 will have stronger oxygen barrier capabilities and will be able to serve various industrial applications including advanced displays and gas tanks." 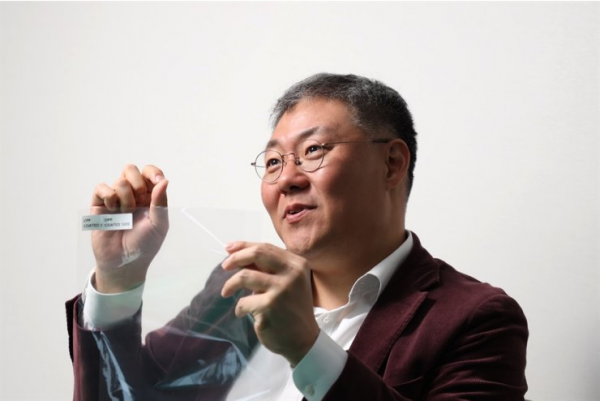